Posted by Anne-tastic! on Monday, March 29, 2010 / Labels: Grace at Home / Comments: (0)
I had some visitors this weekend... Some to sit down for a cup of tea and check out the new place...
Some offered to tear down wallpaper... 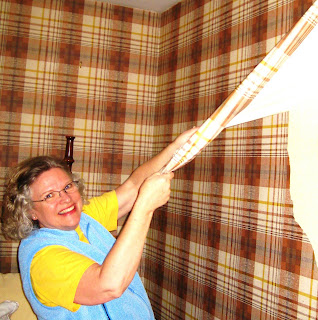 (Hi Mom!)
Some offered to scrape the walls... 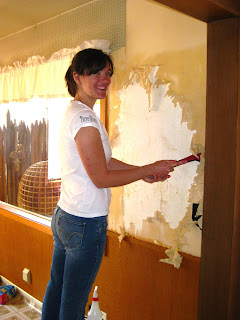 Seriously - this girl rocked it... The dining room, the foyer...
She's for hire if you want... She works hard and fast!
And some to just play dress up with the wallpaper remnants... 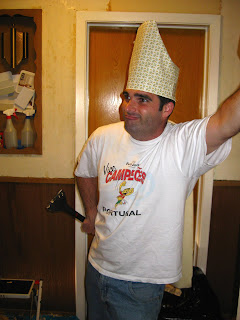 But... Amidst my vistors... I uncovered some ancient treasures... 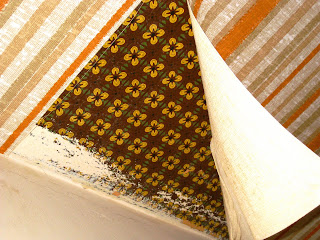 More wallpaer! (I ordered a steamer to attack this layer!)
My dad's artwork 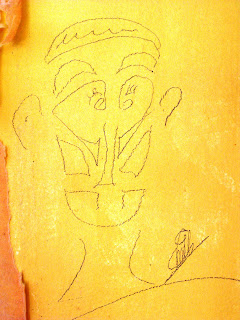 (Silly Daddy!)
And... the lovliest of all... A bit of grafitti from an romantic who valued  - above all -  God, family, and home.   Above the doorway into the kitchen...  I tore away a layer of vinyl wallpaper and then saturated the leftover backing with a vinegar solution when I began to see a message appear...
Encircled in a heart... 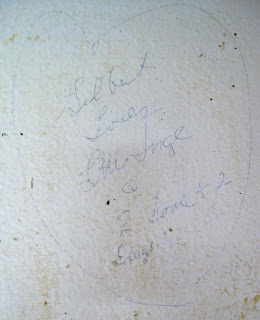 Creativity in the time of high stress

Posted by Anne-tastic! on Sunday, March 21, 2010 / Labels: Fabric and Fashion / Comments: (0)
First I decided to move.  Then my boss scheduled a business tour of the mid-west... Our flight home occured hours before the moving truck arrived.  Then my landlord decided he wanted me out sooner than agreed on so he could show the place (didn't happen).  I had to scramble to eliminate all traces of the cat and call Kitty Disneyland (my parents) to see if they could take him a few extra days...  Then one of my nearest and dearest friends decided to have a wine-tour/St. Patrick's themed birthday party the weekend before said business trip... which of course I couldn't miss...

So what did I decide to do in the midst of boxes and packing and the chaos that was my life last month?  SEW!  Sew what you ask? 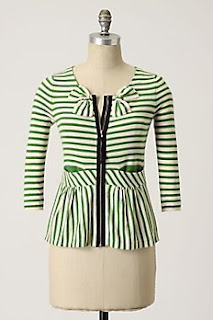 Somewhere along the line this year I told myself if I can make it, I don't buy it.  And this was certainly an attempt... About $20 in fabric/zippers compared to a lot more at Anthropologie.  No pattern, just my purty little eyes.  I purposely eliminated the pockets.  If given the opportunity, I'd like to redo the vertical stripes at the bottom of the garment.. but that's for another time and another day... Much bigger things on my plate now...
But here I am... Blowing off steam... 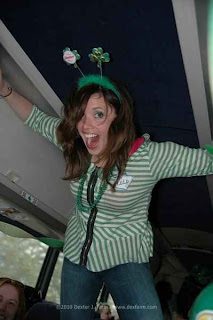 On a party bus.. probably 3 wineries in.  All the kids were doing it.
It felt good.

Posted by Anne-tastic! / Labels: Grace at Home / Comments: (0)
Once I get settled... Here is a list of DIY projects I intend to embark on in my new home... 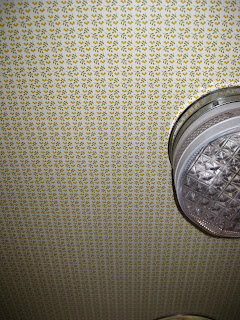 4.  Perhaps a kitchen remodel? (Ok, maybe I'll get professional help for that...) 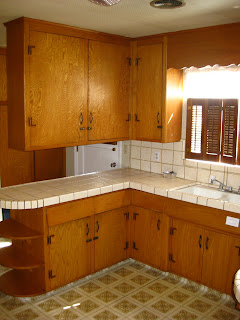 5.  Gussying up this old chair (another treasure found in the back yard) 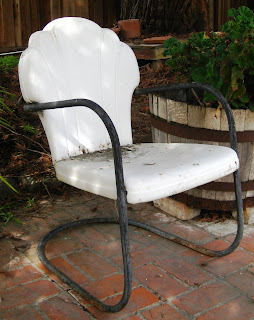 6.  Fanci-fy-ing this awesome hanging birdcage chair... Hm... Maybe I can pair it with my 50's-birdcage print-dress-from-curtains...(if I ever get it done) 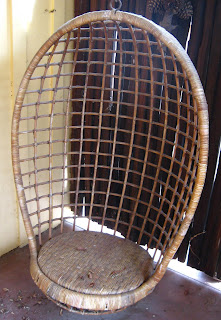 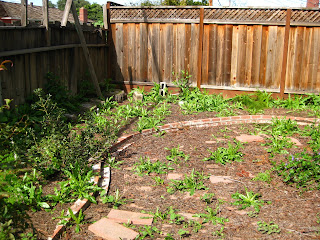 8.  Making Lemonade, Lemon Curd, Lemoncello, out of my lemons! 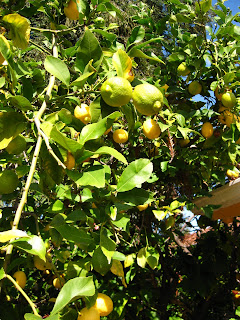 
Anyone who knew my paternal grandfather knew he was a character.  I think it was his goal in life to put a smile on other's faces.  I believe he succeeded.
The neighbors across the street, if asked, would tell a story about the day they brought their newborn twins home... on the porch were two identical little baskets left anonymously from the elderly gentleman across the street.  Each basket was filled with baby goodies, a hat... a comb, a rattle.
As a kid it was always fun to go to Mama and Fafa's house because I knew most likely he would chase me around the backyard like a gorilla or offer me candy as a special treat before going back home.   It was like Disneyland.  Always fun.  Always laughter.  Always love. 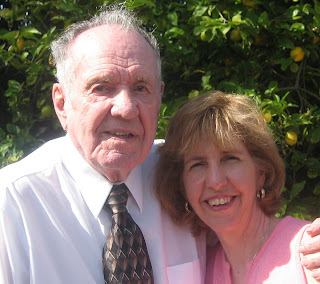 and again with the love of his life (1975)
Towards his later years - I was extremely humbled and in awe of him when I visited him in the hospital.  He might have had a broken hip or some other ailment and this was one of various week-long stays where he was confined to a bed.  If it was me... I would have been cranky and my bad attitude probably would have discouraged any potential visitors or nurses or doctors from visiting me again.  Not Fafa.  He accepted it with grace and joked and flirted with the nurses; made everyone feel at ease despite the fact he was in a place he didn't want to be.  From the perspective of a young child and also as an adult, this is how he lived his life.  Certainly something/someone to learn from.
Last week I moved into the house he shared with his wife and where they raised my dad and uncle.  I won't go into the surge of emotions I felt walking through his vacant house for the first time since before his passing.  But I feel very blessed to live here; take ownership and keep the house in the family.
However... It needs a bit of work... Wallpapering, painting, maybe a new roof... perhaps a kitchen remodel down the road?
Yesterday in the backyard, I unearthed remnants of other characters my grandparents invited into their lives... 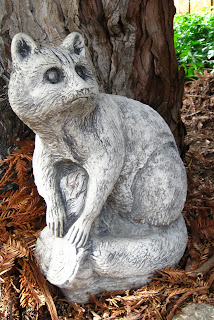 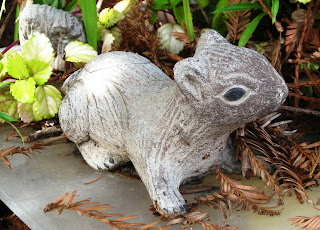 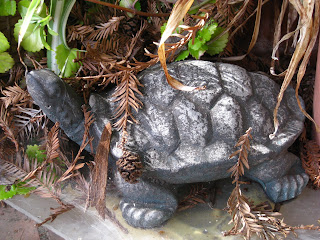 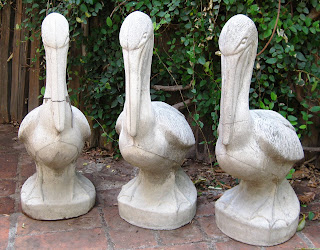 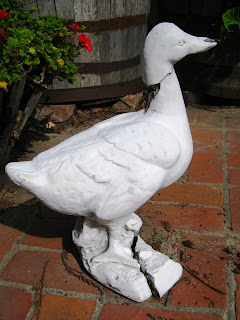 Crackers - the poor guy is about ready to quack crack up!
And last but not Least... Lenny the Flamingo... 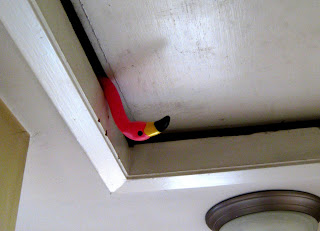 He likes to hang out in the attic.  Ok - he's actually has nothing to do with my grandparents, but instead is the result of a pre-move-in party my family and friends (characters cut from the same cloth) held in honor of me.  Unfortunately I was not invited... but I was greeted one day - as I walked in with boxes - to see my vacant new house decorated with yard sale signs, easter eggs, stickers, Hawaiian Leis and various other goodies... including 'Lenny the Flamingo'!!

Posted by Anne-tastic! on Friday, March 5, 2010 / Labels: Grace at Home / Comments: (0)
Two years ago my sister and I repainted my parents' bathroom.  I believe it came out a little more purple and a little less pink than the interior decorator intended.  My parents mom didn't want to deal with painting again so they decided to live it.  One day at Home Depot my mom haphazardly pointed to a shade of pink and mentioned this was the color she wanted the bathroom to be.

So when they went out of town one weekend we hit Home Depot, bought all of the supplies and went to the bathroom ... we went to the bathroom, and prepped, primed and painted the walls.  It was during a spring time heat wave. Hot. Muggy. Gross. At least the paint fumes covered up the smell of my sister's sweaty armpits. 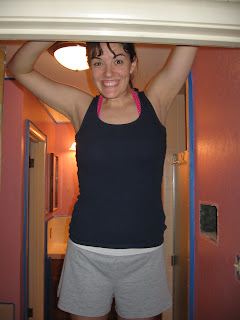 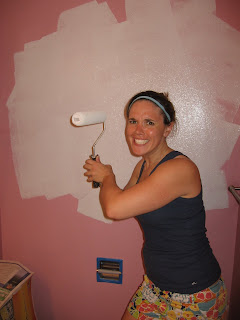 We had a good time and we were REALLY proud of our results. 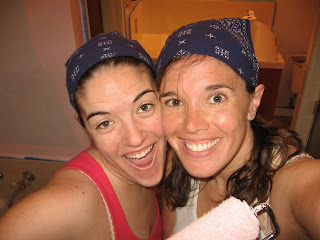 but then we thought... Did we go too far?  Would they hate it?  Would they be upset we vandalized their property?  Would they applaud us with tears of gratitude, or would they shun us and put coal in our Christmas stockings?  As a precautionary measure... my sister stayed with me for a few days. It was all for naught.  They liked it (Phew!)

And now I'm moving (Ya, I know! No more CLND!!).  Into my grandparent's house  (many-a-future-posts will be on this topic, so be patient my friends.)  I want to share with you what MY new bathrooms look like.  I apologize for the rough pictures... but you'll get the jist. 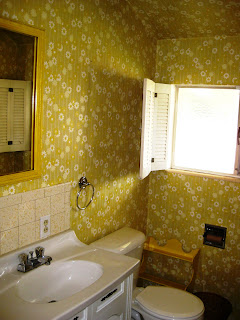 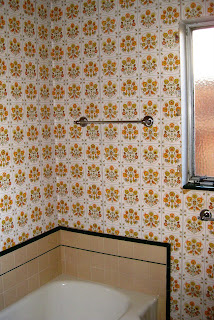 The Master Bath
Check out that Wallpaper?!  Straight from the 70s!  Time for an upgrade... a renewal... time for a new paint job.

Whaddya think?  Should Mom and Dad repay the favor and kindly paint/dewallpaper one of these for me?

Let's vote!  (Maybe I can bribe Dad with cookies and Mom with fabric...hm...)