I admit it (I don't want to because I'm a dog person - I'm also currently single and in my 30s  - I want no association to a crazy cat lady.) 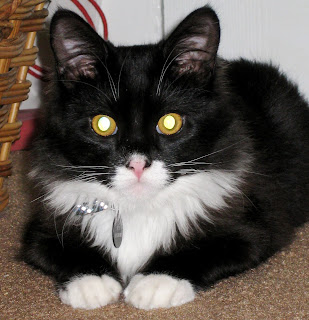 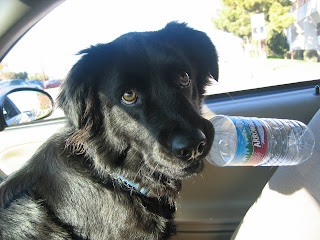 Maverick the dog
But we're starting to gain understanding of each other... He makes me laugh and we're starting to get along better.  I suppose that's because he thinks he's a dog (did I mention I'm a dog person?).
I also have a weird neighbor.  She has very odd habits and she's loud and I'm a little afraid to cross her path, so I pretty much avoid her.  I call her the Crazy Lady Next Door aka CLND.

We live in an old-victorian-converted-duplex.  We share a front door and a wall and that's about it.  My bedroom is in the front of the house; the window looks into my porch and onto the street -for privacy reasons, my curtains are usually drawn 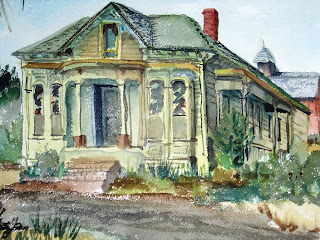 Not my house - but my grandma painted this sometime in the 1960s and its pretty darn close!
This morning I was rudely awakened by multiple slams of my front door
"Ah..." I thought to myself mid-dream, "Crazy Lady Next Door!!"
I looked at my clock and saw it was 6:30am.  I was hoping to squeeze in a few more minutes of sleep.

Rico was curious about all of the commotion outside, so he lept off the bed, snuck behind my bedroom curtains, and plopped himself on my window sill ready to catch the side show.

This is normal behavior for her so I usually ignore it.  Today, I pretended like I was happily in dreamland, but it was a little more difficult as she was on my porch talking loudly on her cell phone.  She has a high pitched rhaspy voice which to me equals nails on a chalkboard.

Except it didn't get fainter
And she was talking baby talk
And.she.wouldn't.shut.up!

Then I heard a faint "tap tap tap" on my window... Still trying to grasp the last few minutes of sleep, I ignored it.

Then I heard it again (the baby talk is still going on).  Annoyed - I sat up to silently throw insults her direction and figure out what was going on.   Rico was going crazy, jumping up on the window and attacking things between the curtain and my 100 year old plate glass bedroom windows.

CLND was taunting my cat through my bedroom window.  Who does that?!  That's where the baby talk was coming from; where the tap-tap-tap was coming from.  Never mind the fact I was likely home and likely still in bed (I am a morning person, but I do err on the side of caution that most of the world does not like to be acknowledged before 7:00am)  Apparently not CLND.  No, not at all.

I got up in a huff and shot CLND death stares through my walls.  I lured Rico away with his favorite toy and lectured him on the dangers of talking to strangers.